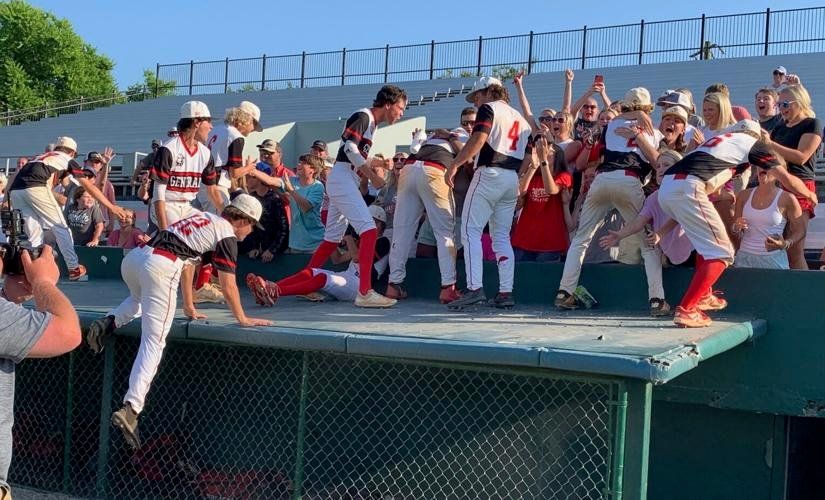 MONTGOMERY – Abbeville Christian Academy junior Justin Murphy remembers exactly where he was in the Paterson Field stands when the Generals baseball team won the 2016 state title.

Now six years later, Murphy and his fellow teammates at ACA have added another state title on the same field.

Although it got scary with a late charge from Jackson Academy, Abbeville Christian captured the AISA Class A state title Wednesday, holding off the Eagles for a 10-8 win at Paterson Field.

“The boys in 2016 got the job done and I am so glad to be on this stage that they were on,” Murphy said, recalling he was on the fourth row behind the dugout during the 2016 title victory. “We did it. We reached the goal we had at the beginning of the season.”

“It was a tough fight, but we won it,” senior Garrett Money added.

“They came in with the want to win,” Upshaw said.

“They wanted to be good and they did that. They came out to practice every day and conquered it.”

Personally, Upshaw, a former Eufaula baseball standout, called the title his biggest achievement, but again stressed the credit belonged to the players.

“It is one of the biggest accomplishments of my life,” Upshaw said. “I am happy for the kids because without them, there is nothing we as coaches can do.”
As Upshaw was doing postgame interviews, the players dumped a cooler of water/ice on top of him, his fourth such bath of the season, including the third in as many weeks.

“That one felt better than all of them because it is the last one,” Upshaw said.

Abbeville Christian, behind a six-run fourth and three-run top of the seventh, had aseemingly commanding 10-3 lead going into the last half of the seventh. However, four hits combined with two errors and a walk helped the Eagles close the gap to two runs with the bases still loaded and just one out.

Relief pitcher Titus McCreight, the third pitcher of the inning, was summoned in and he induced a ground ball on a 1-1 pitch to shortstop Conner Hutto, who ran to the second base bag, stepped on it for a force out and fired to first baseman Jake Hamilton to finish a game-ending double play.

“It was a roller coaster of emotions,” Upshaw said of the seventh-inning drama. “I felt like I couldn’t breathe and felt like my heart was going to stop beating, but they came through with it.”

Murphy said the Generals were thinking a little early about celebrating during the last inning.

“I think for all of us players, we had the big lead and I think it set in (that we were going to win) and we started to cruise, but they got hit after hit and they came back,” Murphy said. “They are a good team.”

Murphy led a 12-hit attack with three hits and three runs batted in. Boone Sumlar was 2-for-2 with two RBI and Reid Quincy had one hit, but drove in three runs. Hamilton added a hit and a RBI as all nine regulars had a hit for ACA.

Money was the winning pitcher. Though his final line didn’t look pretty because of the seventh inning, he pitched well for six innings, allowing just two hits, while striking out four. McCreight picked up a save with the double-play ball.

“My teammates,” Money said when asked why he had success. “They kept cheering me on and kept me going when I was out there.”

Trailing 2-1 early, Abbeville Christian surged ahead with its six-run top of the fourth inning. A three-run double by Murphy sparked the inning.

“The pitching was slower than we had been used to in the playoffs, so I moved up in the box and choked up on the bat a little and got a smooth hit down the line,” Murphysaid.

Murphy’s hit followed consecutive singles by Hamilton, McCreight and Hutto thatopened the frame.
After the bases loaded hit made it 4-2, consecutive walks to Conner Jones and Sumlarre loaded the bases. Another walk, this one to Quincy, forced in a run.

Brandon Early hit a fly ball to deep left that would have scored Jones, but the ball was dropped for an error, allowing Early to reach base. With the bases still loaded,Hamilton walked to force in Sumlar, making it 7-2.

The Eagles closed the gap with a run in the bottom of the fourth on a RBI ground outby Brody Moseley. With two runners on, they threatened for more, but Money got astrikeout to end the inning.

The Generals padded the margin in the top of the seventh with what seemed to be three meaningless runs. Instead, the runs proved to be the game-winning runs.

Hutto reached on a walk and Murphy singled. After the two moved up on a wild pitch, Sumlar earned an infield single that Hutto scored on, making it 8-3. Quincy then ripped a two-run single to make it 10-3.

“Those are biggest runs of the year, getting those last three runs,” Upshaw said. “It was big.”

It was big because Jackson made its charge.

After a fly out to open the inning, an error on a ground ball was followed by a wildpitch and an infield single. Jackson’s Zach Barr singled to score Cain Richardson.

Colton Sullivan followed with a single to load the bases. Jacob Criswell drew a walk toforce in a run, ending the day for Money on the mound and brought in Jones.

However, an error on a hard-hit ball to first base followed by a RBI single by CameranThomas and a hit by a pitch to Moseley made it 10-8.

McCreight then stepped to the mound and got the double play to end it.

ACA scored in the top of the first off a Sumlar run-scoring single after consecutivewalks to Murphy and Jones.

Jackson Academy, though, wiped out the lead with two runs in the bottom of the first. An error and a hit batter put runners at first and third with one out when NathanJames singled to right. Thomas’ sacrifice fly scored the second run.