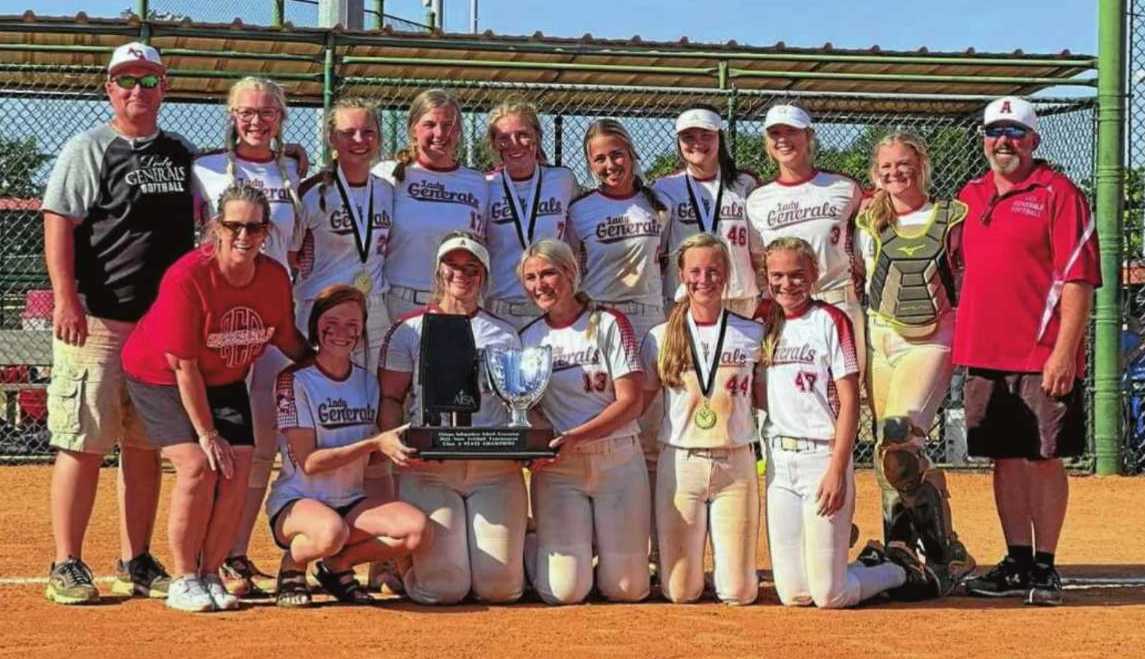 The Lady Generals made it consecutive AISA Class A state titles, beating Crenshaw Christian 7-0 in the finals at Montgomery’s Lagoon Park.

“To be a senior and know that either way it was going to be your last game ever, it feels good to know that we won it and we are back-to-back state champions,” Emma Roberts said.

Hannah Kennedy said winning this year felt a little different in one regard.

“It does feel a little bit different because I am a senior, but it is still amazing to win two back-to-back state championships,” Kennedy said.

The team’s third senior, Cassie Willis, won her first state title. She played at ACA as a sixth and seventh grader before playing at Northside Methodist for a few years then returning for her senior to graduate at the same school as her brother (2017 graduate John David Willis) along with many of her friends.

“Honestly, it is a feeling that is indescribable,” Willis said. “I have only experienced this (a state title game) once in the seventh grade and we came up short. Going back for my senior year and getting that trophy, honesty, is the best feeling I have ever experienced in my entire life.”

The Generals, who were ranked the No. 1 team in of all of AISA for the last month, including AAA and AA teams, finished the season with a glittering 28-3 record.

“It is a remarkable feeling, a remarkable season,” said first-year head coach David Willis, who took over as head coach two days before the season started as previous coach Guy Causey had to step away because of work commitments. “To be able to coach my daughter (Cassie) and to win a state title in the same year, I couldn’t ask for anything better.

“I can’t say enough more for being able to coach a group of girls that had a lot of talent. We had sixth through 12th graders on this team.”

“The big key for the tournament for us was great pitching and great defense,” David Willis said. “We had some timely hitting in a few of the games. We had only one particular game, the Jackson game on Saturday afternoon, where we actually hit as a team all together. For the most part, we scratched runs across and were doing the little things to get the job done.”

The biggest hit of the tournament actually came in Monday’s winners’ bracket game against Crenshaw. Tied 3-3 in the bottom of the seventh inning, Hope Kennedy, an eighth grader, delivered a walk-off run-scoring single to score Paige Welch, who opened the inning with a double.

“The ground up here has been real hard and we were lucky enough that it came off the bat and took a high hop over the first baseman’s head and into right field to get the winning run in,” David Willis said.

“I was really proud of her because I love seeing my sister do great things like that because she is a good ball player,” Hannah Kennedy said. “I love getting to watch her do what she loves to do and I love to get to do what I love to do with her.”

A year ago during their state title, the Generals didn’t have a senior. This year’s team is a little more experienced with three seniors, something that was a big difference, said Hannah Kennedy.

“I think it feels different because over the last year we have grown together closer and we became even more like family,” Roberts said. “It is the same exact team as last year except for Ally Kate (Causey) and Cassie (Willis) and they made it even more like one big family.”

Cassie Willis also said the solid bond between the players was special on this year’s team.

“We just came together on the field,” Willis said. “We might have had some arguments here and there, but just knowing we had each other’s back and the leadership we had just kept us going and pushing us forward.”

Abbeville Christian 4, Crenshaw Christian 3: The Generals moved into the championship round with a dramatic comeback win over the Cougars in the winners’ bracket finals, winning it on a walk-off single by Hope Kennedy.

The Generals then won it in the bottom of the seventh. Welch opened the inning with a double to left. Hartzog then struck out before Crenshaw elected to intentionally walk Willis to set up a potential force out or a potential double play.

Hope Kennedy, though, foiled the strategy, hitting 3-2 pitch to right field to bring in Welch for the game-winning score.

“I was really worried,” Roberts said of the early 3-0 hole. “I knew we could do it. We have every characteristic of a winning team and to be a state champion. It worried me because we didn’t seem like ourselves early on then we turned it around and won.

“There were a couple of talks and we just pulled it together and everybody started hitting.”

Gabbie Causey was the winning pitcher, going all seven innings. She scattered nine hits and allowed three runs, though only one run was earned. She struck out six and walked one.

Abbeville Christian 7, Crenshaw Christian 0: The championship was a little more comfortable for the Generals, who scored three runs in the first to take command of the game.

Though ACA scored a run in the third and three more in the sixth, it wasn’t really needed thanks to Hartzog, the Generals pitcher. She pitched a two-hit shutout and struck out 13 with only one walk.

“She has thrown some pretty good games this year and being a lefty it is a different issue for hitters because you don’t get to see a left hander every day,” David Willis said. “The spin is a little different and I think they have had a hard time picking up her spin. She threw extremely well and extremely had today.”

Offensively, the top four hitters in the ACA lineup did most of the damage, combining for seven hits and four runs batted in. Blalock had two hits, one a triple. Caroline Armstrong had two hits and two RBI. Welch had two hits with one RBI and Hartzog had one hit and one RBI.